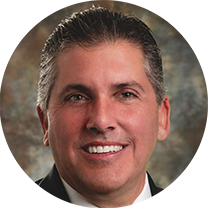 Prior to joining Caris, Dr. Miglarese founded OncoNex Consulting LLC and served as an advisor and interim Chief Scientific Officer for Cielo Therapeutics. Before that, he held various positions in the BioPharma and Diagnostics sectors including Chief Scientific Officer at GeneCentric Diagnostics, Vice President of Oncology Translational and Clinical Science at OSI/Astellas Pharmaceuticals, Assistant Director of Translational Research at Array BioPharma and Section Head in the Department of Cancer Research at Bayer HealthCare Pharmaceuticals.

Dr. Miglarese received his BS in Biology from Virginia Tech and earned his PhD from the Department of Microbiology and Immunology at the University of Virginia. He continued his post-doctoral training studying the molecular and cell biology of cancer at Pfizer Central Research and in the Department of Dermatology at Yale University School of Medicine where he elucidated the molecular basis underlying a central oncogene-driven autocrine growth loop in melanomas.