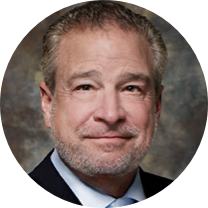 Chairman, Founder and Chief Executive Officer David D. Halbert is a proven leader with a strong track record of growth and value creation in the energy, financial and healthcare industries. With more than 40 years of experience, Mr. Halbert continues to be one of the most successful entrepreneurs in the United States. He is a passionate advocate of personalized medicine and leads Caris Life Sciences® with a philosophy that more precise and individualized information will lead to dramatic improvements in the quality-of-care patients receive. Mr. Halbert has been tremendously influenced by his mother’s passing from cancer, as evidenced by his personal investment, commitment, and unwavering dedication to making precision medicine a reality for cancer patients.

Prior to founding Caris Life Sciences, Mr. Halbert founded AdvancePCS® in 1987, a leading pharmacy benefits management company, where he served as Chairman and CEO until it was sold to CareMark® in 2004 for $7.5 billion. Under Mr. Halbert’s leadership, the small, privately-owned company grew into a publicly traded, Fortune® 250 corporation with over $15 billion in annual revenue. AdvancePCS became the largest pharmacy benefit manager serving more than 75 million people – one in four Americans – and managed millions of prescription transactions annually, representing approximately $28 billion in drug expenditures. Focused on advancing quality of care while lowering healthcare costs, Mr. Halbert supplemented internal development with 11 successful strategic acquisitions, and posted 38 consecutive quarters of record-breaking earnings per share, including an unparalleled 147% compounded annual revenue growth over 14 consecutive years. When AdvancePCS was sold, it returned 31 times its initial public offering (IPO) value, 150 times the venture capital investment made by J.H. Whitney, and Caanan Partners in 1993, and 227 times the original investors’ money.

Thereafter, Mr. Halbert formed Caris Capital® in 2005. Since its formation, Mr. Halbert has managed and sold over $1.2 billion in assets acquired with a weighted average return of seven times the initial investment. Also in 2005, Mr. Halbert acquired Pathology Partners, Inc., an Irving, Texas based pathology company specializing in gastrointestinal pathology, which was later renamed Caris Diagnostics. As chairman and CEO, Mr. Halbert grew the small gastrointestinal pathology practice into a multi-disciplinary pathology practice with more than 70 pathologists providing diagnostic services for more than 3,500 patients daily – an increase of 452% from 2005 to 2010 – and grew revenue by 40% CAGR. Later in 2011, Caris Diagnostics was sold to Miraca Life Sciences® for $725 million.

In May 2021, Caris raised $830 million in growth equity with a post-money valuation of $7.83 billion, which represents one of the largest capital raises in precision medicine. With this investment, Caris has raised approximately $1.6 billion in external financing.

In addition to serving as the Chairman and CEO of both AdvancePCS and Caris Life Sciences, Mr. Halbert was the largest shareholder and board member of Medical Edge, a comprehensive medical practice support system sold in 2011 to Texas Health Resources and Phytel, a leading provider of integrated, population health management solutions that was sold to IBM to form IBM Watson Health in 2015. Phytel managed a comprehensive registry with over 30 million patients – one in every ten Americans – combining big data, robust analytics, and software to identify care gaps, engage patients and measure outcomes.

Mr. Halbert and his family also created and solely support the Caris Foundation™, a non-profit, private foundation that aids impoverished people by helping to provide for their basic needs. Established in 2002, and headquartered in Colleyville, Texas, the award-winning Caris Foundation seeks to establish a local presence within communities in order to understand the people’s basic needs and implement solutions that are culturally relevant and sustainable across Africa and Haiti. The foundation employs more than 400 people.

In 2017, the Caris Foundation was appointed to lead a $98.5 million dollar investment by the United States Agency for International Development (USAID) to bolster Haiti’s health system and expand essential healthcare for up to 4.2 million people. The program, called Projet Santé, comprises a consortium of partners, including the Catholic Medical Mission Board (CMMB) and the Haitian Health Foundation (HHF), who work together to offer integrated maternal and childcare services to Haitian families, including immunization, reproductive health, nutrition services, and HIV prevention, care and treatment. As part of Project Santé, the Foundation manages more than 3,500 health workers in Haiti.