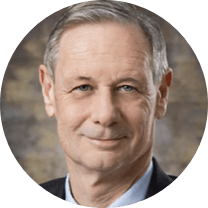 Jonathan Knowles, Ph.D., joined the Caris Life Sciences Board of Directors on September 1, 2009 and accepted the position of vice chairman starting on January 1, 2010. Dr. Knowles’ distinguished career has spanned decades in both academia and the pharmaceutical industry, including his most recent role as president of group research at Roche, a position he held from 2007 to 2010 and member of that organization’s Corporate Executive Committee, which he held from 1998 until 2010. Dr. Knowles was also a member of the Genentech Board for the 12 years and a member of the Chugai Board for seven years.

Additionally, Dr. Knowles was the chairman of the Corporate Governance Committee of Genentech. He was for five years the chairman of the Research Directors’ Group of EFPIA (European Federation of Pharmaceutical Industry Associations) and was the first chairman of the Board of the Innovative Medicines Initiative, a unique public-private partnership between 28 Pharmaceutical companies and the European Commission with a budget of more than 5 Billion Euros over 10 years. Dr. Knowles focused the Roche group on key disease biology areas of high medical need and in-depth understanding of molecular pathology of disease. Under his leadership, the company developed and implemented a strategy of highly effective therapies based on personalized healthcare and built one of the best pharmaceutical pipelines in the sector which still supports the commercial success fo the group .

In 2010, Dr, Knowles was awarded the Scrip’s Lifetime Achievement Award for his long academic and commercial career distinguished by his passion for personalized medicine and was elected to the Academy of Medical Sciences, UK, in 2016,

Jonathan Knowles was appointed as the chair of the Genomics England Access Committee in 2017,  and is a visiting professor at the University of Oxford. He was awarded a distinguished professorship in personalized health care at the Finnish Institute for Molecular Medicine at the University of Helsinki in 2010, and is professor Emeritus of translational medicine at Ecole Polytechnique Fédérale de Lausanne in Switzerland. In addition, he is a member of the European Molecular Biology Organization and a visiting fellow of Pembroke College, Cambridge.